Been feeling vaguely bad for a lot of today which finally made me want to draw bloody stuff to vent. And I haven’t drawn too much fluffy stuff as of late, so … The Toy Castle death stuff!

First up, a what-if from chapter 8 of the novelization for if Snowcone died trying to fight the crazed cannibal fluffy. 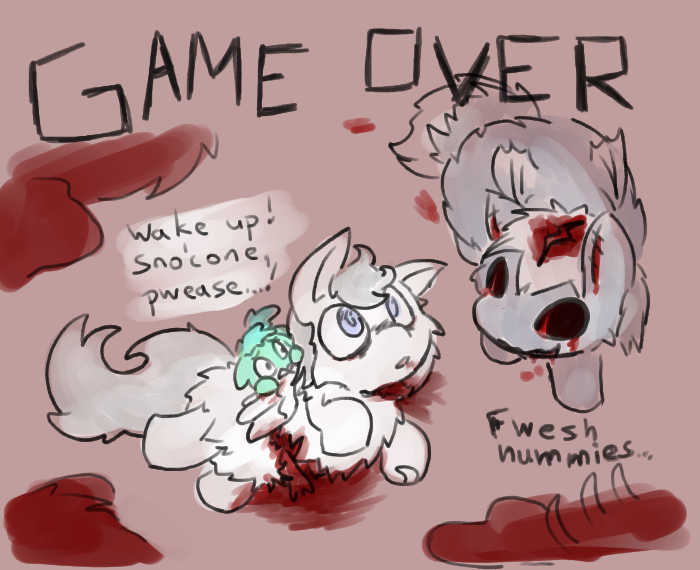 Sorry Mint, but she can’t help you any more.

Second, a doodle of the canon opening to chapter 9:

Man, Wawa looks so happy about it. He knows exactly how much doing that hurt.

I assume that’s Wawa in the first picture too ?
I’m honestly always surprised to find out he is blue
I usually think of him as white or grey.

Nope, two separate people. (Er, fluffies. Monsters?) Wawa’s wish was for strength, while the other poor sod asked for food and basically got turned into a mindless zombie.

And honestly, being white would make him a pain! He’d have the same colors as Snowcone then, haha.

I see, I see.
I figured Wawa being so unnatural, he could change his colors and appearance.
I kinda like that zombie fluffy, I’m usually a horror artist.

Yep, DEFINITELY like Corpse Party. Still wish this was fully realized into a game but it is what it is…

The Toy Castle was one of my favorite stories, I waited with so much anxiety for each chapter and was so upset when it ended