What's True in Your Headcanon? (by Newb_ronswek) 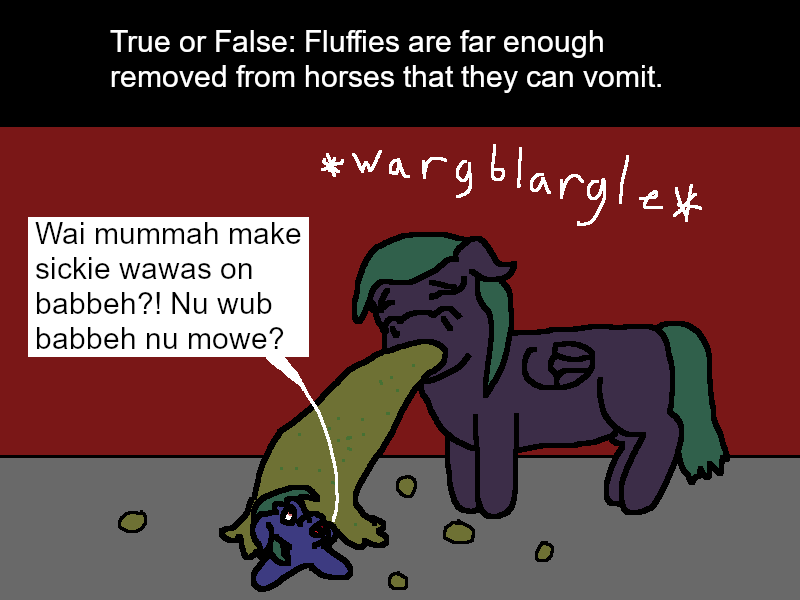 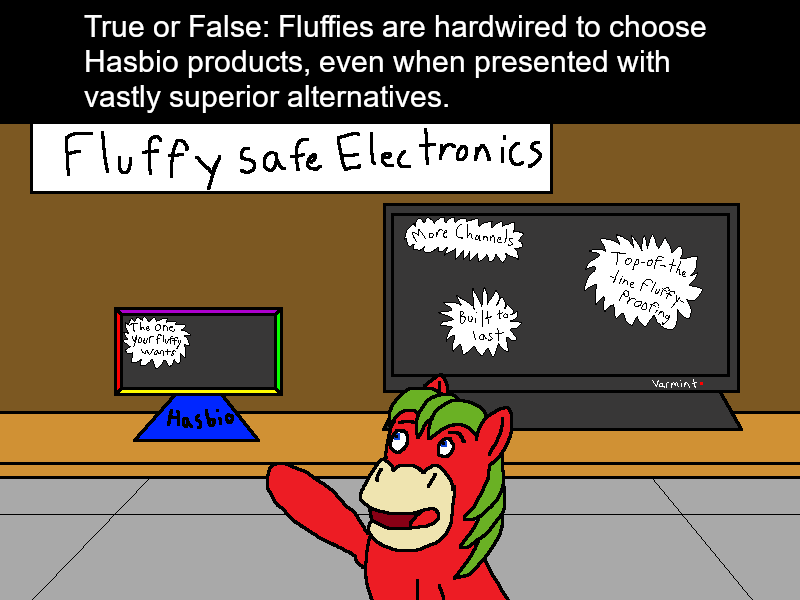 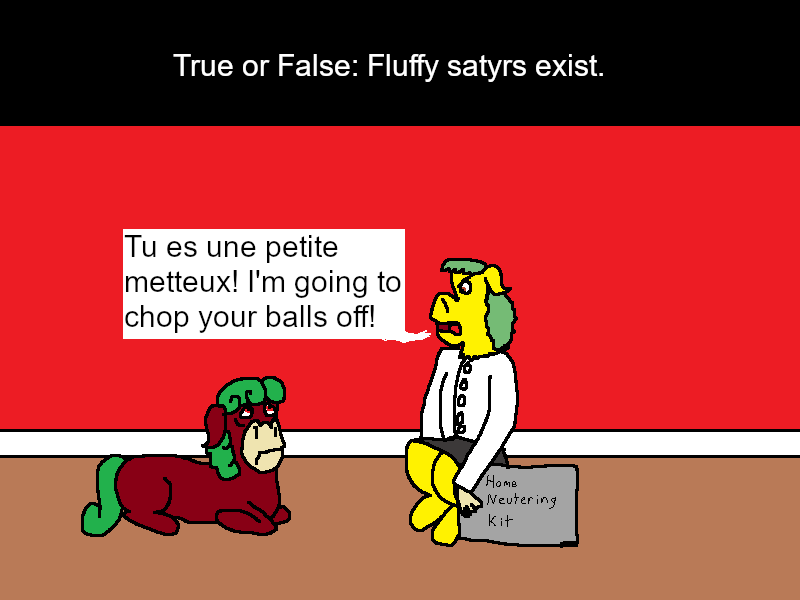 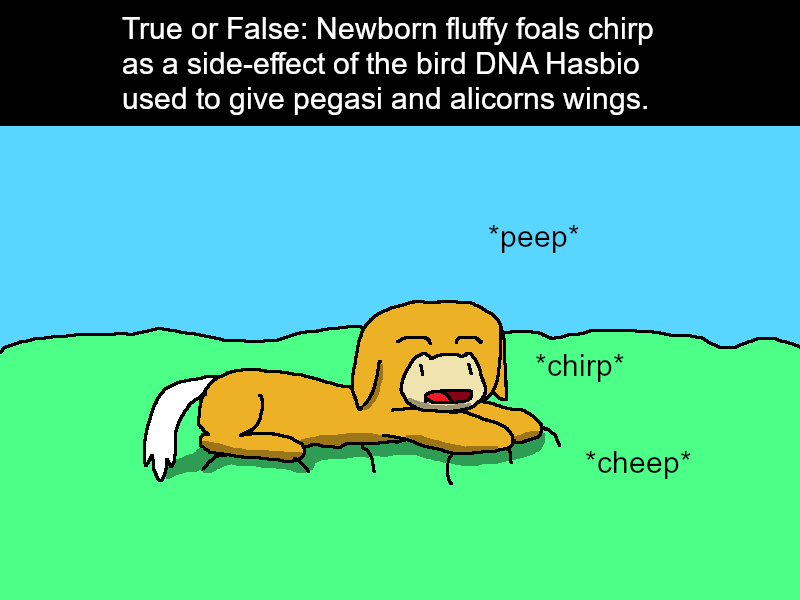 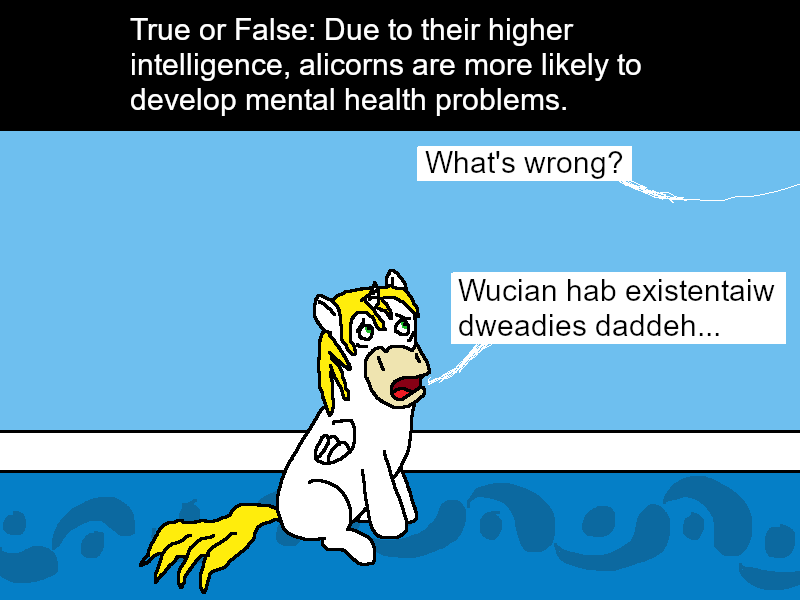 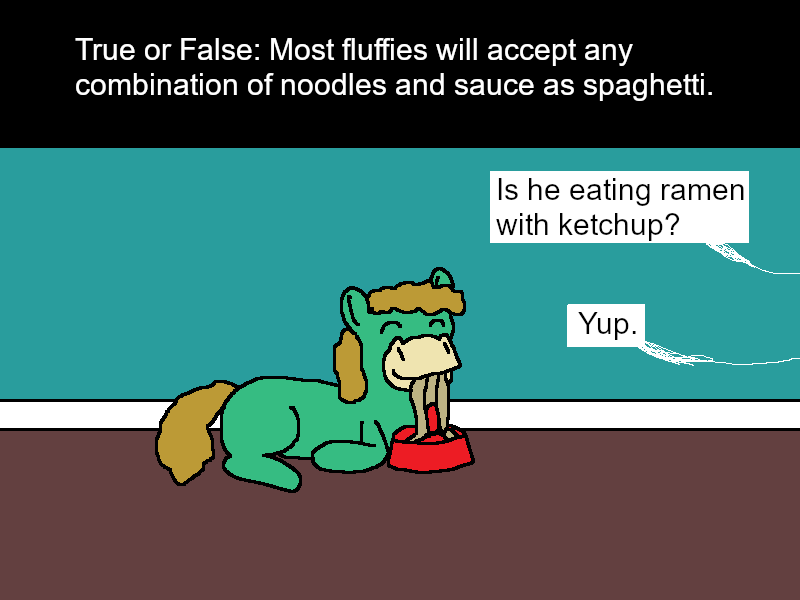 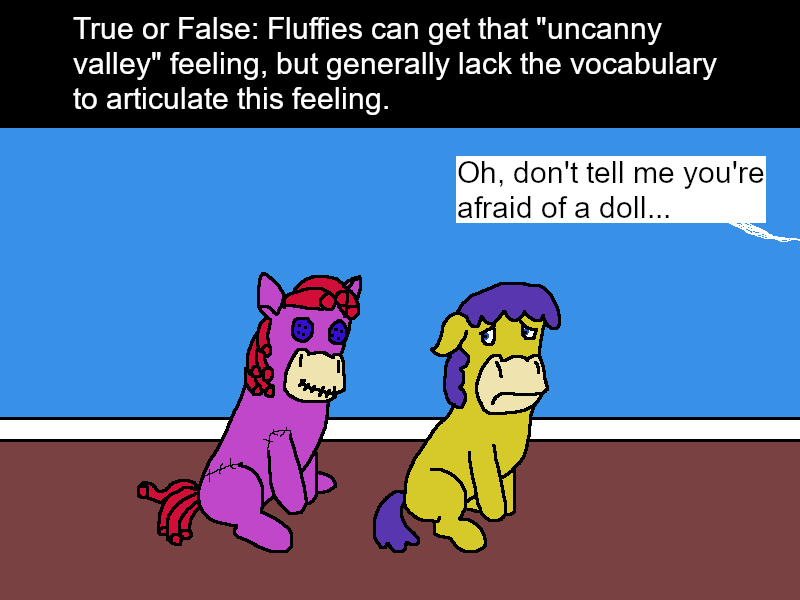 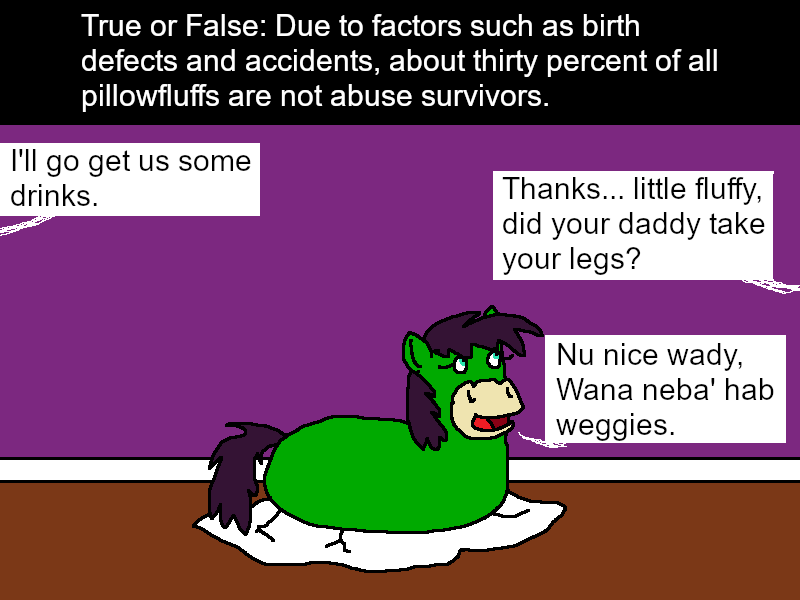 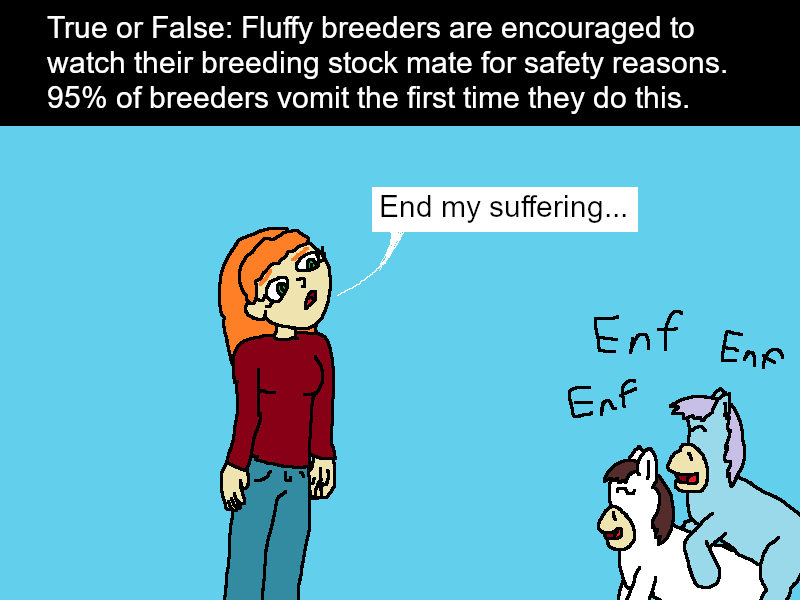 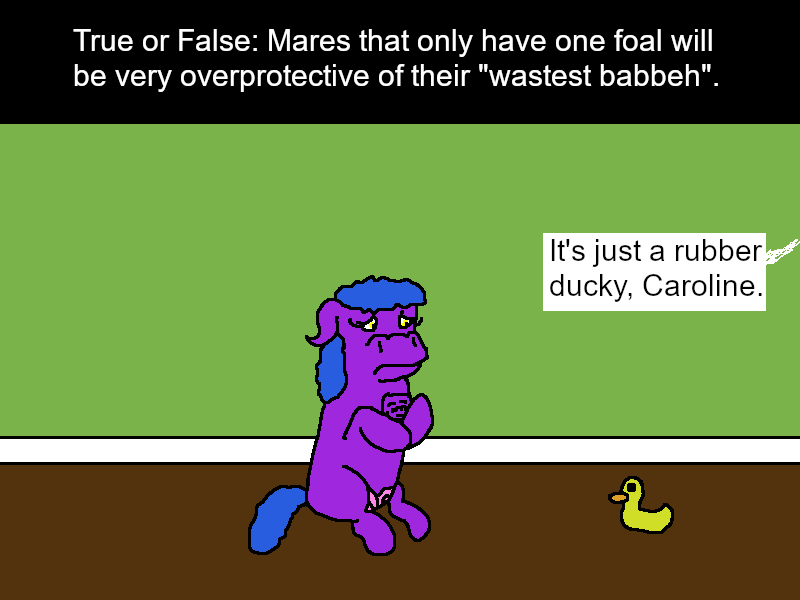 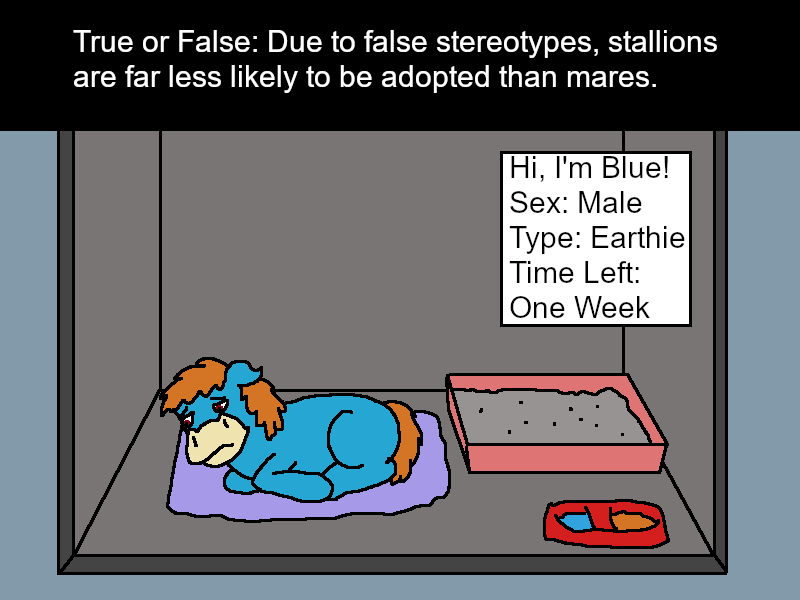 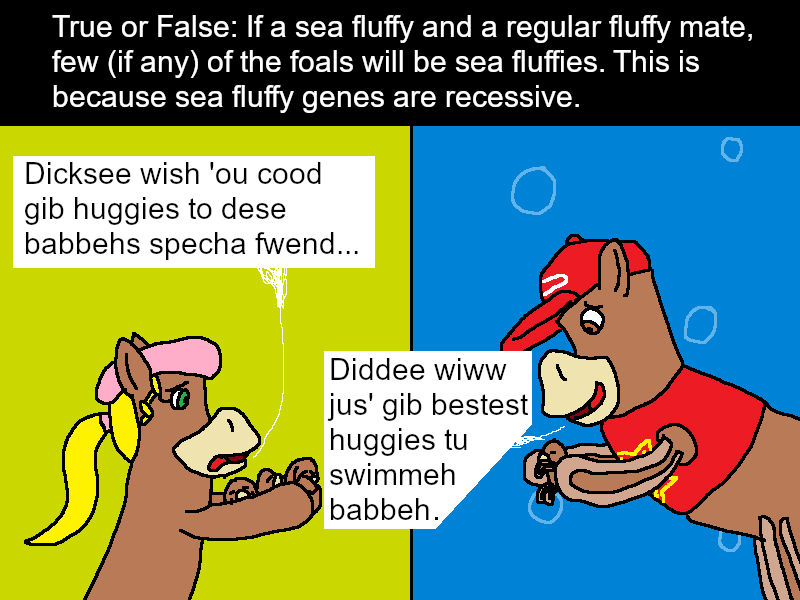 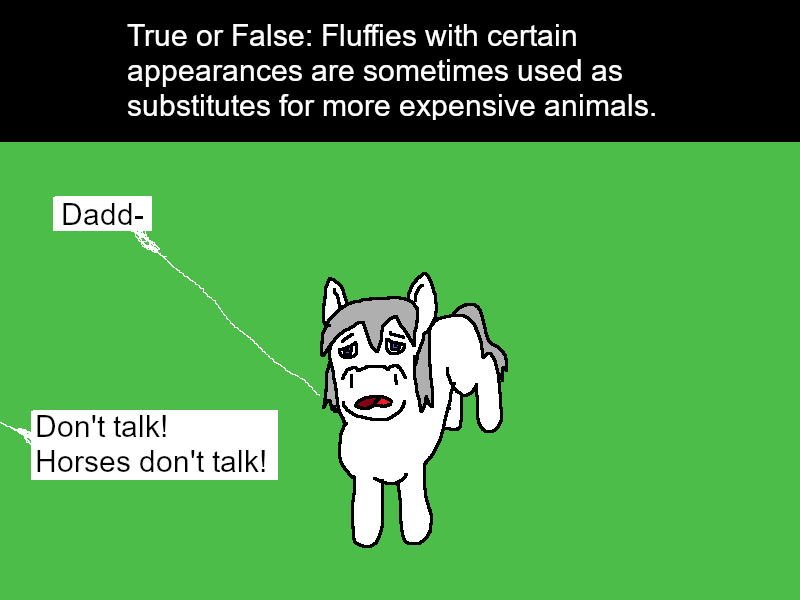 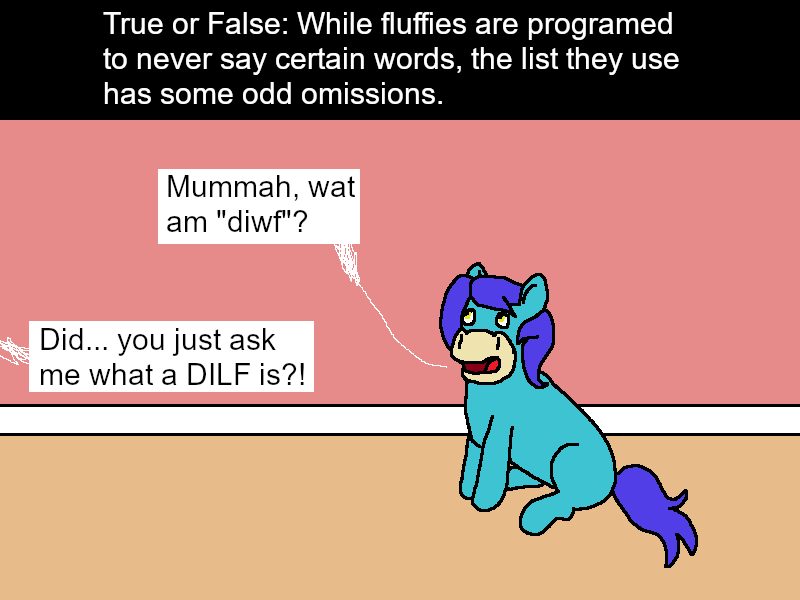 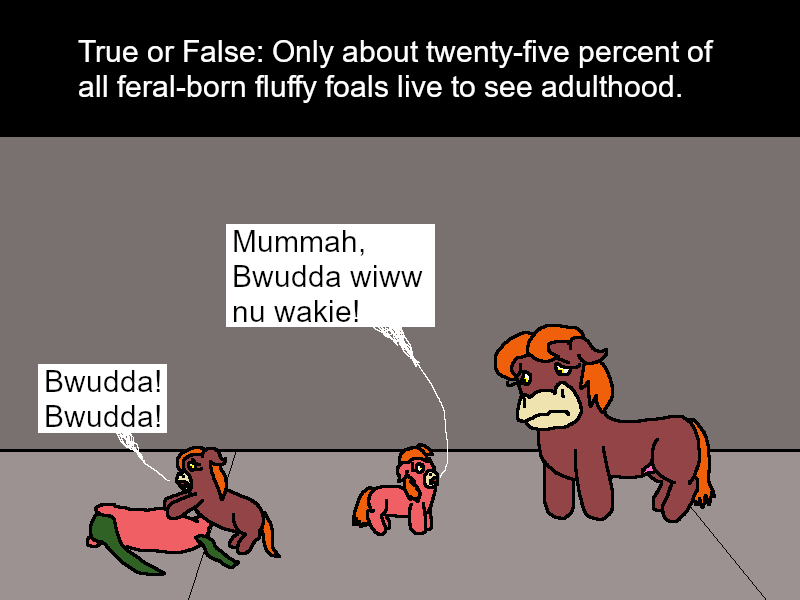 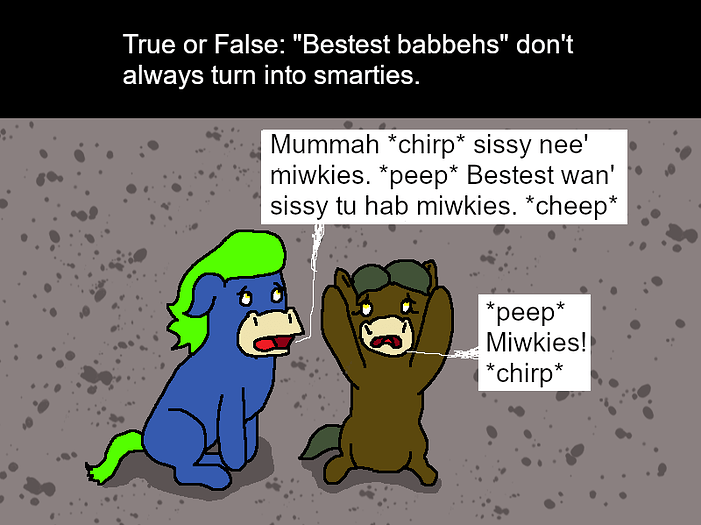 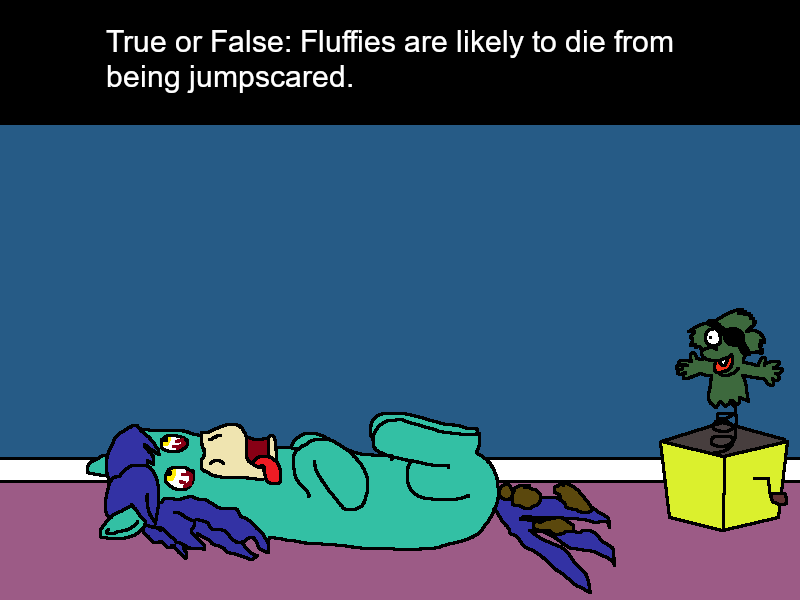 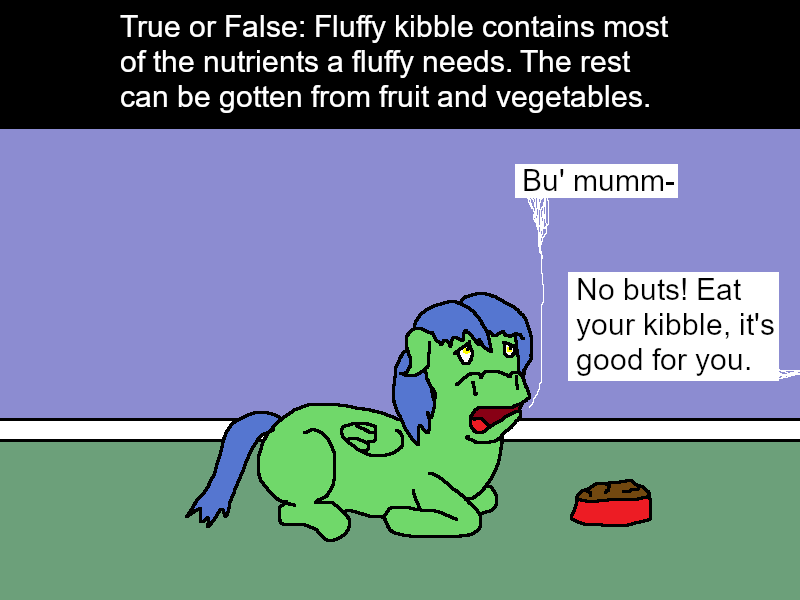 Let’s see cause i’m crazy enough to awnser all of these.
So my head canon then
Mine is stil in flux, so i am figuring it out still.

2: yes and no it exists in early generations but has been bred out over the course of years

4: Can’t say I ever gave that much thought so no.

6: Yes why else do the little bastard chirp otherwise ?

7: I could go for that idea it explains why normal colors are considered " bad" No reply as of yet.

8: Yes Natural selection generally shuns defects to produce healthy offspring that propagates the species
Fluffies are hardly natural and they breed like rabbits but natural instincts are still in there somewhere

9: Never gave alicorns much thought but it would be hilarious if true.
An artificial life form thats generally speaking dumb as a rock grasping the fact that it is indeed artificial and having a BSOD.

10: false for my fluffies sketties are just the fluffy word for their favorite food.
But they wil happily accept actual sketties.

11 : Yes.
just because they are dimwitted and artificial doesn’t mean they cant struggle with heady feelings or emotions.
They just lack the vocabulary and mental capacity to explain this to anybody including themselves.

12: Possible
Fluffies are dumb and accident prone after all.

13: Cant’s say i ever gave this much thought.
I would imagine artificial insemination is a thing.
So no comment.

14: Yes.
Yes they would it seems natural in so far fluffies are natural.

16: no land and sea fluffies can’t produce viable off spring.

17: Can’t think of anything but its an interesting idea.

19 : 25 seems a bit lenient, but because they breed like rabbits, are accident prone dim bulbs and blitheringly walk in to danger, most ferals aren’t long lived anyway.

20: I hate that excuse, even if its just a preprogrammed phrase they use, because they don’t understand.
So yes true once trained the excuse becomes null and void.

21 : possible it depends on the disposition and personality of the “bestest”
Some are little shits regardless of their upbringing.

22 : false if a fluffy can die that easily feral corpses would be clogging up the streets because everything scares them to death.
They are skittish, and carefull.

23: kibble is just the easiest cheapest food a fluffy can be fed and provides the basic nutrients
…just about.

I’m gonna answer as many of these as I can.

1: True.
2: False.
3: False, but I’ve got much weirder shit than that.
4: ??? (I haven’t given that matter much thought, teebeehaitch.)
5: False. I haven’t really used “smarty friend”, just “smarty”, but maybe that can change.
6: True.
7: False.
8: ???
9: True. Umbra’s supergenius intellect didn’t do his sanity any favors.
10: True, but some fluffies know the difference.
11: True.
12: ??? (I haven’t really done non-abused pillowfluffs.)
13: A bit of both (the part about watching them is true, the part about 95% of breeders vomiting isn’t. You don’t see dog breeders puking all the time.)
14: True, in many cases.
15: False.
16: ??? (I haven’t done regular fluffies and aquafluffies mating yet.)
17: False.
18: False. Fluffies in my headcanon are perfectly capable of growing beyond their bioprogramming and using words they were programmed not to use.
19: ??? (Lots of ferals die before reaching adulthood, but the exact number is unknown. Especially because many of the bodies tend to be devoured whole by whatever killed them…)
20: True. That shit doesn’t work forever…
21: True.
22. False, in most cases. They’re not that fragile.
23: True. Flufftopia kibble is more nutritious than competing brands.

1: True - Fluffies can and do make “sicky wawa”, a feature put in to keep them from eating anything that wasn’t good for them

2: False - Fluffies like shiny and colourful, brand type be damned

4: False - Dick size is not decided by type. Crimson has the big dick and he’s a Pegasus

6: Semi-True - Fluffies chirp as a way of signalling hunger or distress, it’s likely bird DNA is in their fucked up coding

8: True - This is especially hard when dealing with internal problems since the mother can smell runt scent but the owner sees no outward issue

11: False - Fluffies will anthropomorphise anything they deem “friend”

12: True - But a much lower percentage

13: Semi-True - Lots if uneasiness but no vomiting

14: True - But only in the last foal isn’t a “poopie”, otherwise they just get abused even more so than before

16: False - Species are too distant, only stillborn foals to be had

17: False - If you get a Fluffy you’re getting a Fluffy

18: False - Fluffies can and do swear if pushed too far and have a base under of most words they’re told

19: True - Though again, much lower percentage

22: False - They just shit themselves

23: True - But variety is important so as to keep your Fluffy engaged at dinner time

I am very distracted by the fact you chose Diddy and Dixie for this. They’re cousins!

Uh, no they aren’t? They’ve been a couple since Dixie’s first appearance in DKC2. If you don’t believe me read this.

I saw these on the subreddit and actually liked the discussions some of these sparked. But now they are here all at once - oof, the overkill.

For the fun of it:

Okay, that does make it a lot better. I think I got confused because the relations between the kongs aren’t made clear in the games, and since Diddy was originally meant to be DK’s son/nephew and Tiny is Dixie’s baby bro, it just seemed like a theme of “new second-kong is first-kong’s family member”.

3)False; though not out of the realm of possibility

7)False; it was a logical error that was color associations test for the initial batch of fluffies. Majority of ‘bad color’ fluffies stigma is almost exclusively shared by domestic fluffies.

8)True; was working on a story about how a foal was rejected due to having heterochromia

9)False; any intelligent fluffy can. I just yet to write any.

11)False; most fluffies don’t know what a stranger is.

13)False; though a charge my have to watch more aggressive fluffies, most will wait for the call of ‘gud feews.’

16)False; though never put much thought into it.

18)True; they may also use new/newer slang words that may not be appropriate since their vocabulary isn’t ‘updated.’

21)True; and those that show signs of smarty behavior can be fixed. The point of no return in when they reach sexual maturity.

22)True; though rare and highly based on personality

23)False; it contain all that a fluffy would need to survive. It’s just recommended that you vary up their diet so they won’t get sick of it.

I answered some of these already on Reddit. But lets see if I give different ones.

For all cases, “it depends on the breed/local regulations and culture” applies since I’m not a fan of universally consistent rules across the species and workd for humans or Fluffies. Some Fluffies adhere heavily to their programming to the point of nonsapience, others feel it merely as git feelings they often ignore. So many programming builds and alterations of Fluffies exist that all behaviors are “on average”.

#4 is obviously true. It’s about time someone out there is finally dealing with the important questions.

13a) True. Usually by webcam. They don’t require a ton of monitoring during the double decker pecker wrecker, but a few glances mean better safe than sorry.

13b) Nope. The amount of other horrifying and disgusting things that a breeder has to see and clean up greatly outweighs any squeamishness about witnessing a push start in progress. Her giving him the stone cold stunner usually is nowhere near to stimulating emesis.

Single live births, OTOH, usually don’t provoke this unless there was already trauma to begin with.

Trying to get back into Fluffy writing. So lets give this a go to try get the creative juices flowing aain

1.Yes. Hasbio would want an indication that a fluffy was sick or ate something it shouldn’t and vomiting is a very easy way for a fluffy to say “Somethings Wrong”. Plus a fluffy doesn’t have the DNA that would prevent it like in horses

2.No. Hasbio was planning on making products that were more attractive to fluffies based on their research. But they couldn’t force what an owner could buy allowing other companies to muscle in.

!. Definitely. Being able to vomit opens up more possibilities, but a few regressive cases that can have interesting potential as well.

7.Either that, trying to stand out more in the pet mammal market, or going for a more toy-like look for legal reasons.

i like these a lot. these are some pretty solid headcanons.