Gerard Saves A Foal by Chikahiro 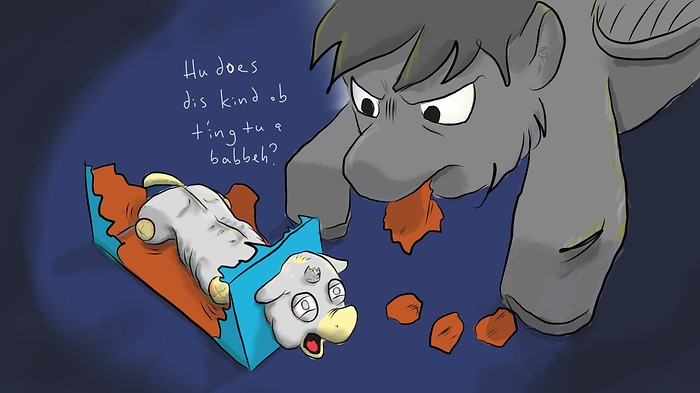 Gerard recoiled in shocked horror so hard the he smacked up against the wall of his living room with an audible ‘BANG’ that sent the foal in a can into a series of panicked peeping from inside of the can.

Inside of the box was a light grey unicorn foal, it had been chemically blinded in both eyes, its horn had been crudely broken off and its mouth had been glued shut.
…
He went to the side of the cardboard box set to work tearing out chunks of cardboard with his teeth and hooves until the little grey foal came loose.
…
When he finally had the box open Gerard was startled to discover the real extent of the damage done to the poor creature. It was missing all four of her legs, an angry itchy looking redness starting to spread across the stumps.

This is piquing my interest, especially since its cyberpunk.

cool idea
not something you see everyday

OH MY GOD! Thank you @Chikahiro! This is amazing! I love it!

You’re welcome. It was quite a scene to read, so I had to draw it. I half want to redo it now though! Arg…

If you want to for practice, I’m certainly not gonna stop you…

…But I love it just the way it is!

You’ll need to read the story, but this is from Part 3, which is the latest installment.

The surgery was poorly done, as Gerard gently removes the foal from the box, freeing it from the head trap, does the strangest thing ever happen. The shoddy stitches fall apart, showing the hooves to be as they originally are, it’s just a flap of foal flesh poorly drawn taught to make sure that the legs were to be useless in a weeks time. Gerald, as a caring fluffy clean-licks the hooves, showing the fact that the poor Fluffy was put this way in a quick fashion. Gerard noticed that the hooves are fine, and won’t be able to get infected, does he move on to clean-like the cold foal. A few times a spurt of blood shocks Gerard, but continued cleaning helps stop the bleeding.
After a short time, Gerard places the wearying foal in his fur to warm it up, and heads home. Just as Gerard rounds the corner and down the alley, does the abuser discover that their tortured “Enfie Times Pal” is missing. Finding no trace of Alpha Enf, their in there car, going to another foal in a can vending machine for Beta Enf.
Gerard is greeted by his speciaw fwiend, and they take care of Nekkie Fwuffy as one of the herd.

Ah, but you see, my dear Gerard, it isn’t a baby. It may look like one, but it is, in fact, a ‘biotoy’, an organic animatronic built by humans for our own amusement. It isn’t really alive, and any indications of ‘distress’ or even ‘consciousness’ are merely part of it’s programming. It is just a machine, a toy.

And Gerard? So are you.

Edit: though Gerard is still a biotoy, even if (spoiler redacted). So my post still applies, though in a different way.

Now I am even more piqued

Give it a read. They’re short and only three stories in but it’s neat!

Have you read the other parts is the story by chance?

Why glue its mouth shut tho?

It keeps it silent until you bring it home and dissolve the glue with water.