Spindle awoke abruptly, right where he had crashed into the door. He was alone, his fur soaked. His head was pounding. He was lying in a shallow puddle, gross water pooling in his mouth. He sputtered and slowly stood, unsteady on his hooves. He spat out the foul, dirty water that had been on the asphalt.

Nobody had picked him up or even offered to help him while he was passed out. He pouted. Why were humans always so mean to him? He’d done nothing to hurt them, ever. So what was with the lack of empathy here? Spindle started to slowly trudge back to his alleyway, so dazed and tired that he forgot what had happened there. Blood leaked from an unnoticed wound on the left side of his head.

“Oh, NU!” Spindle cried. He’d come back to the alley, and spotted the human’s corpse lying in a large trash bin. The human that had attacked the now-dead one must have moved him after he bled out. Spindle shivered, shook, and twitched. He couldn’t stand the sight of a dead human. His ears rang, and he felt dizzy. His vision tunneled. He hardly realized he was falling to the hard ground as he fainted.

Spindle opened his eyes to pitch blackness. There was no scent in the air, and he heard nothing. Until the nothingness was broken by a sound.

“Oh thank god, I thought I was alone- Where are you?” The voice asked.

“Spindwe am hewe! It am dawkies… Nu wike, huu huu!” Spindle whimpered and cowered as he realized there was a void all around him. His body, while the same colors it was before, seemed to be slightly glowing. He was standing on something hard, but there seemed to be no floor beneath his hooves. His body was the only thing producing light. Everything, except him, was pitch black. He saw nothing but himself in the void. And it scared him. 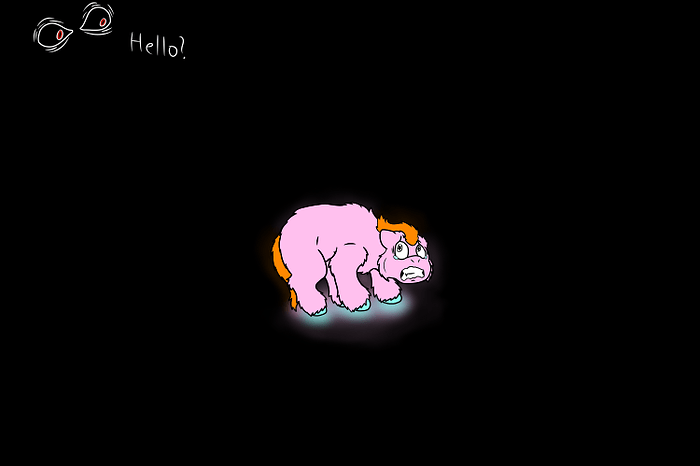 “Wait, I see you! Turn around, would you?” The human voice asked.

Spindle whirled around to face the opposite direction, and saw a human lying on the not-floor. The poor stallion saw the neck wound, still pouring blood. Spindle screamed. He nearly hyperventilated as the human’s body stood up and walked over to him. Never until now had he realized just how tall humans were compared to him. The human towered over him, blood dripping down.

The human was pale, almost a ghostly white. He had dark brown hair, pale green eyes, and frown lines on his face. Spindle couldn’t ignore the blood as he shakily pleaded with the dead man.

“P-Pwease, nu huwt Spindwe, fowevah-sweepies mistah! Su scawy, huuu!” He hunkered down and covered his face with his hooves, tears of fear coming to his eyes. The human’s own eyes widened in realization and horror.

Spindle was roughly grabbed by the scruff of the neck and yanked upwards. His frightful yelps of “Bad upsies!” were ignored. The human’s hands were as cold as ice, and it hurt to be held so roughly. His neck ached even more, and the fur that was grabbed pulled and pinched at his skin.

The human got very, very close to his face, looking him dead in the eye. The human reeked of blood and death. Spindle gagged. Horrid.

The human’s deathly white face wrinkled in an animalistic snarl. “I remember you. You were the fluffy who saw me getting attacked.” He gripped Spindle harder, and the fluffy gasped in pain. “I can only assume that you didn’t go get help, because now I’m dead!” He dropped the fluffy on the ground and clenched his fists. He bared his teeth and aimed his furious gaze down at the biotoy before him. “Tell me, fluffy. Did you go get help when you ran off?”

Spindle shivered and shrunk down to the not-ground, tears of guilt falling from his eyes. “Nu…”

A shaky, pissed off sigh fell from the human’s mouth. “… You fucking shitrat. I always hated fluffies; Cowering, smelly, unnatural creatures. And now one is the cause of my death.” The human pointed down at him, poking him hard in the nose. “This is your fault. I’m dead because of you.”

The human wasn’t exactly dead directly because of Spindle, but Spindles inaction had been a factor. It had been, truly, the attacker’s fault the man was dead. But in his anger, the dead human blamed the fluffy before him because he hated fluffies. Therefore, he automatically blamed fluffies for his problems. And he didn’t care. Unfortunately for Spindle, the dead man was an asshole.

“Huu huuuu, am sowwy! Spindwe su sowwy!” The heartbroken earthie sobbed and shook his head. He hadn’t meant to get this human killed! He loved humans! Even though they’d done nothing but hurt him, he cared for them and wanted to have one as a friend. But now he’d been the fault of a human’s death. There was no way a human would befriend him now. Just like how fluffies shunned killer fluffies in the wild, humans would shun him now, too.

“So? That doesn’t help me. That doesn’t fix the fact that I’M DEAD.” The human shouted the last words, his loud voice booming in Spindle’s ears. The human crossed his arms. “So what do you think will fix this?”

“Spindwe nu knu… Am sowwy.” Spindle hung his shaggy head. How would he fix the dead human? If he was the cause of this human’s death, he had to do something.

The human sighed. “You know what? You’re useless. Even when you’re trying to help, you fluffies are all useless. Here’s what can help me; I’m taking your body as my own.”

Spindle gasped. He’d heard of that, but he knew that only bad things came of a dead human taking possession of another human’s body. He remembered all the scary movies his old owner liked to watch. Having that happen only ended badly.

So he begged the human, because there was nothing else he could do. “P-Pwease, not dat! Anyfing but dat! Pwease nu take Spindwe’s body!”

“I don’t give a flying fuck if you don’t want me to possess you. It’s no longer your choice.” The human reached for Spindle’s head and latched on, and once again everything went black.