The Folly of Hope - Stories: Tommy - (Cmss for Reddit83er) (InfraredTurbine)

Sup folks!
Remenber Tommy, right ?
Well, it comes to an ending too!
Commissioned for @Reddit-Word_H83r 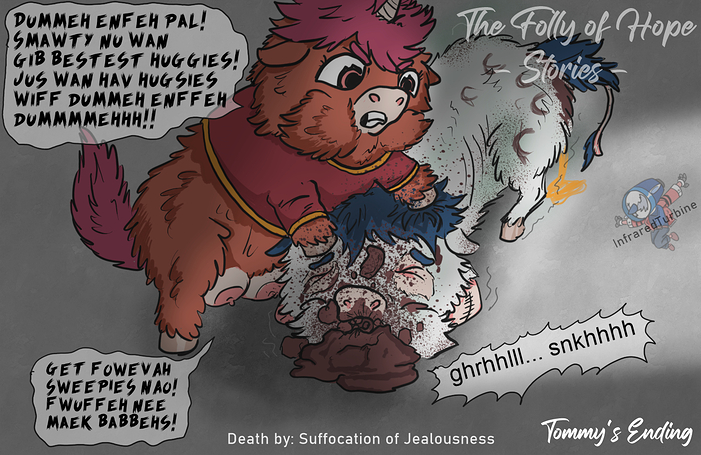 I guess she really wants those babbehs o_o

For commissions, illustrations and so on, feel free to contact me!

If your mate would rather fuck the underaged, unconsenting boy-toy than you, then I think you might be the problem lady.

Still though, as shit a way to go as it is, at least it’s over for Tommy. He gets to be with his mum again. Or he falls into an endless dark void but at least his asshole is safe.

Oh actually by the time the story happens, he’s already an adult

Theres gonna be or not some sowwy hoofsies after discovering tommy’s dead body.

Fair, but my point still stands. Tommy clearly doesn’t want to get buttfucked but this bitch is victim-blaming cause her mouldy old cunt isn’t doing it anymore.

Jealousy in Fluffies is one of their more fucked up traits.

If your mate would rather fuck the underaged, unconsenting boy-toy than you, then I think you might be the problem lady.

Or the mate is a pedophile. Or is just a rapist.

I think, honestly, they’re both jacked up. At least with her the enfie pal’s suffering is ending.

These have all been hysterical.

A classic take on the ‘women most effected’ trope. xD