The Unicorn Who Flew: A fluffy bedtime story (Author: Squeakyfriend) 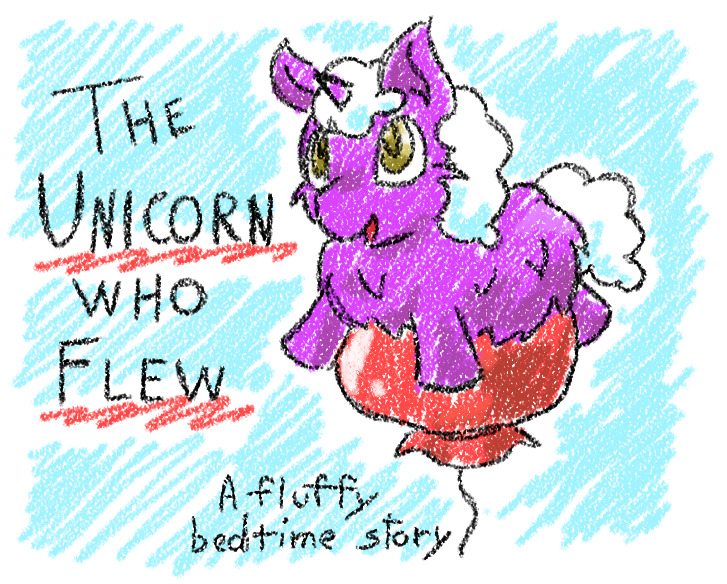 The Unicorn Who Flew

Once upon a time there was a fluffy family, a winged mother with three babies. Two had wings like her, but the third baby had a horn!

The horned baby’s name was Pointy. His family was always happily talking about when they would fly.

“Pointy fwy too!” said Pointy, but the others just called him silly.

Pointy didn’t think he was silly.

Then, one day, the family passed a large bridge. Pointy had a great idea and climbed high, high up to its very top!

And so, Pointy jumped.

“Pointy! Nu!” cried his mother. “Nu can fwy! Nu hab wings!” Pointy realized that she was right, but it was too late. He was falling!

Suddenly, a red balloon broke Pointy’s fall! It floated high, high up with Pointy on top, until he couldn’t even see his family anymore.

At first, Pointy loved being in the sky. He could feel the wind in his fur and almost touch the clouds! Pretty birds flew with him and he could see the whole world!

Pointy touched a cloud but it wasn’t soft or fluffy at all, just cold and wet! Then he tried to play with the birds, but they made angry sounds and pecked at him!

Pointy asked the balloon to take him back down, but it wouldn’t listen. The clouds got dark, cold rain and loud thunder filling the sky.

All Pointy could do was to hide and cover his eyes and cry.

It couldn’t get any worse! Pointy felt sure of that.

And then the balloon popped.

Pointy fell until he hit something hard, and cold, and slippery. He didn’t know what it was, but he held onto it as hard as he could.

So hard was his grip, that he didn’t let go even as he fell asleep.

When Pointy woke up he was high up on a church. He could see far and wide, but he couldn’t see any way to get down!

He was too high up to jump, and he couldn’t climb either!

Cold, hungry, soaked and aching all over, Pointy did the only thing he could.

And say what you will about fluffies, but they can be very loud when they want to be.

Soon people had begun to gather below the church. Nobody could figure out how Pointy had gotten so high up, not even the priest!

But they all knew he couldn’t stay there forever, and so the priest had to get a long, long ladder to get Pointy down.

When he was picked up Pointy was scared, but he was so cold and so hungry that he didn’t squirm at all.

He was wrapped up in a towel, and it was so warm and fluffy that he thought he’d fall back asleep.

Pointy was brought down to a big crowd of people who all wanted to see the flying unicorn, but Pointy was so scared of all the prying eyes that the priest soon took him inside.

“Maybe I could use you as a mascot,” said the priest, and so he fed Pointy and treated his wounds.

Pointy didn’t know what a mascot was, but he enjoyed it just the same. If only his family was there now!

Pointy gasped. His family! He needed to tell them all about his adventure! As soon as he had recovered, he decided, he was going to go find them.

But that’s a story for another day…

The text version of Squeakyfriend’s The Unicorn who Flew., It is posted ehre for anyone who wants closure. Squeakyfriend didnt get round to drawing the end of the story as it would have been too complex apparently.

Squeakyfriend wanted to continue the story, but never got round to doing so.