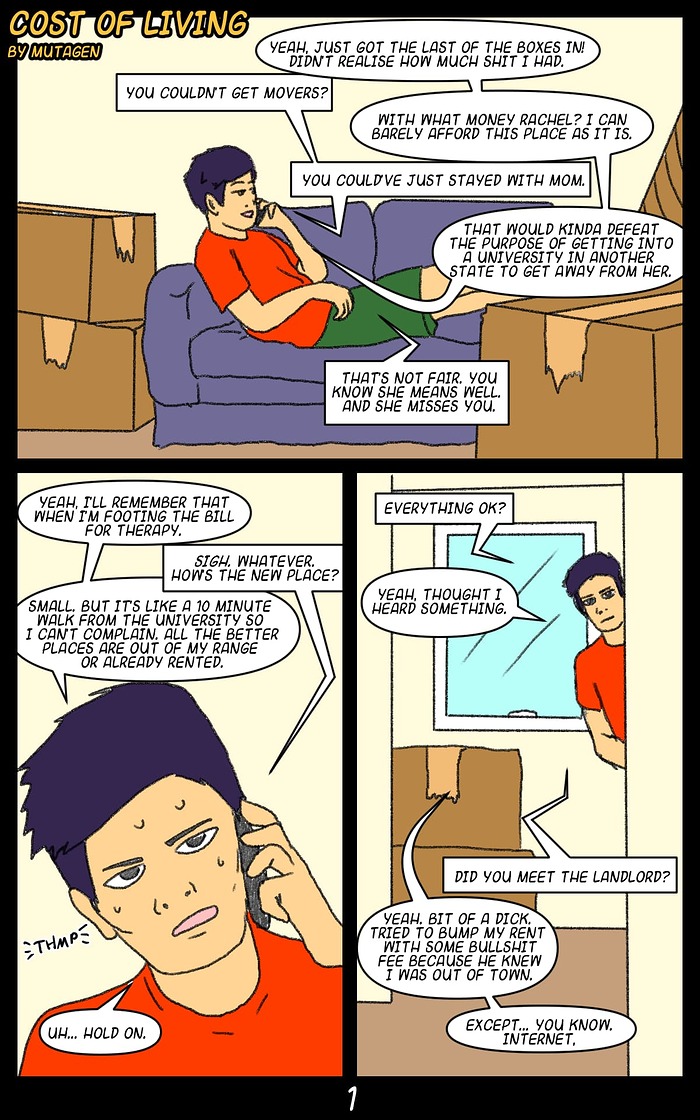 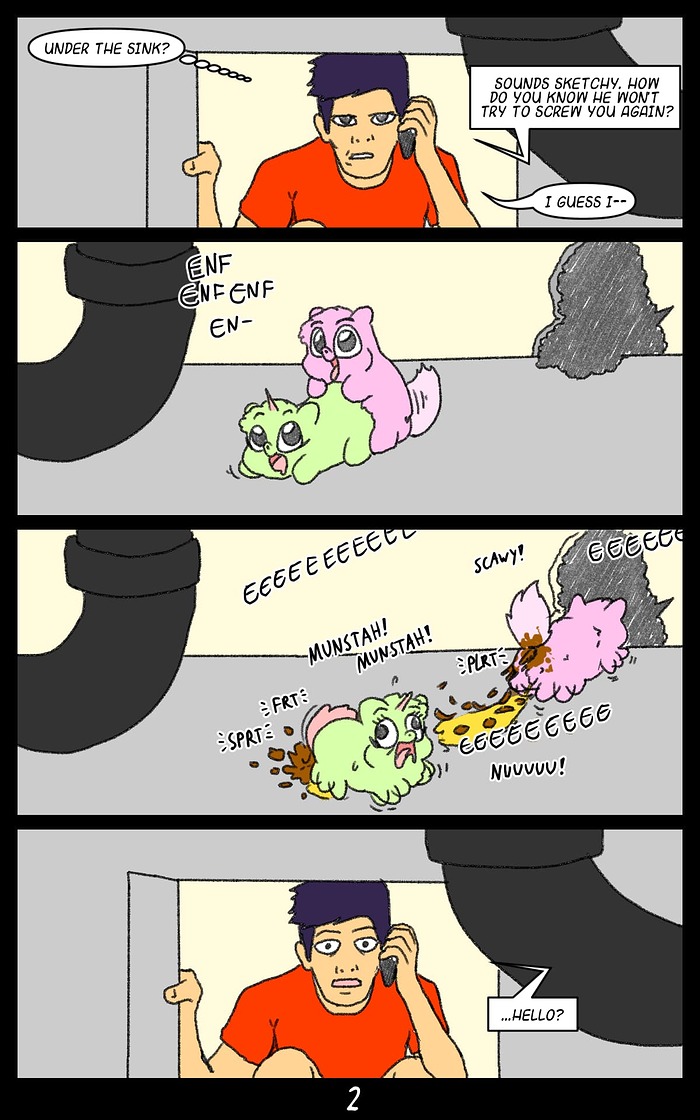 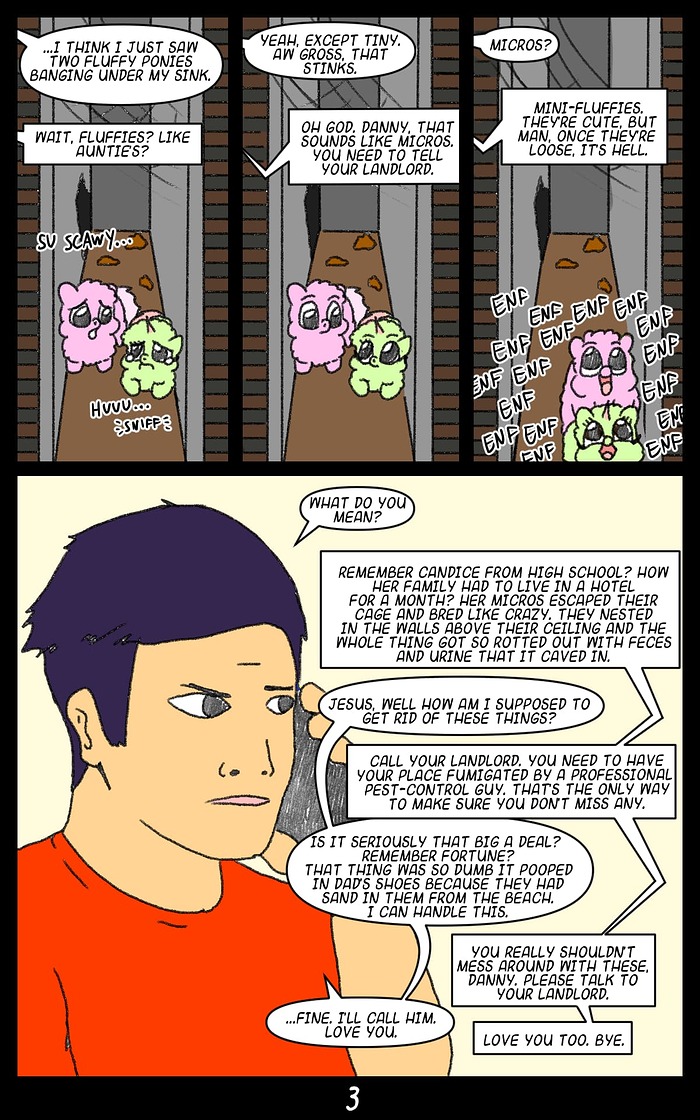 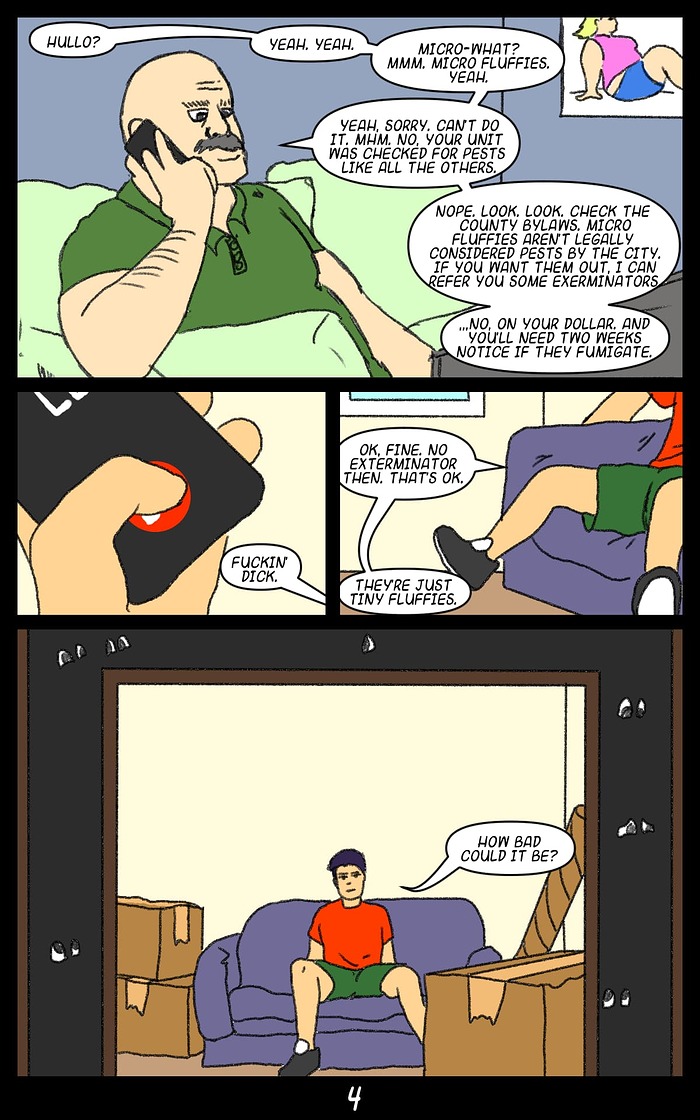 chaos will surely not ensue

I really like the premise of having micros infesting your house like mice. It would be sort of a mind fuck having these adorable, talking creatures that you also hate.

This reminds me of that one HP love craft story about rat people living in the walls, except it’s just the constant sound of enfing

thanks, its a bit of a departure from what i usually draw and write. more grounded in reality. it’s forcing me to think about things like headcanon, which i normally disregard entirely. should be fun

Ron Howard: It was really bad.

I’m curious to see where you go with this, and I do prefer more grounded approaches to fluffies. That said, I feel that pest stories a little dime a dozen, and hope that you don’t go full extermination “kill 'em all” with this story, as too many have done.

I just want to say I’m very happy they were having fun together versus some of the other scenarios that come up. Whether they all die or this becomes “Joe’s Apartment with Fluffies” is something else.

Seems very similar to a roach problem I dealt with for many years… hmm, can’t decide which type of infestation I would prefer… fluffies would definitely do more damage, but roaches aren’t nearly as satisfying to kill…

Roaches don’t talk or attempt to reason. I feel less qualms about dealing with a roach problem then I do with a microfluffy infestation. I can see fluffy infestations as a potential thing, but then it makes me thing how they could be better prevented in the first place.

I think the trick for me is I don’t expect fluffies to have the same mobility as mice or roaches. The worse the place is with them? I think the longer the landlord ignored the issue. For a micro to get into the roof? That would be quite the feat. They can’t stick to walls, I don’t think they have the body strength or size to walk up one wall with their backs pressed up against the other side. Likewise, their size is more a limit than roaches. I don’t know if they could squeeze into places like mice can either.

Now, its not to say they couldn’t be pests. I’m already pondering how to deal with micros in my current story. I don’t know how you’d get them cheaply spayed/neutered via surgery.

That’s sort of the “mind fuck” part I was imagining with this sort of thing. Waking up every morning and having to throw out glue traps full of crying fluffies. Or some adorably naive one tugging on your pant leg asking you to get him some cereal because he can’t reach. That stuff would start warping your brain after awhile.

just get a few tarantulas, that otta take care of them. Spaghetti bated traps could work but might not get them all. A few snakes could also work. Maybe everything together would be a good way to go.

but then it makes me thing how they could be better prevented in the first place.

The main thing with prevention is how grounded the setting is. A lot of the normal fluffy stuff has either highly incompetent or malicious humans IMO. A grounded setting? I think it’ll need things like people just being too busy/tired to deal with things, not having the money, “its the landlord’s job,” not knowing how and being intimidated by it (one day I’ll deal with that garbage disposal in the kitchen… maybe), etc.

This idiot landlord is too cheap, obviously, and not thinking of the long-term value of his investment.

Waking up every morning and having to throw out glue traps full of crying fluffies. Or some adorably naive one tugging on your pant leg asking you to get him some cereal because he can’t reach.

I like the premise since it can go in a number of directions from there. It can cause interesting internal debates. I mean, if I set a glue trap and wake up to a screaming, crying micro? I’m NOT doing that again. Poison? Well, waking up to a dead fluffy in my cereal or bag of rice is going to cause issues too. Or the little thing dies in the wall and stinks up the place. There’s a lot of cause and effect to be had here, and while you might not care about their quality of life? You care about your own.

Can you trap them? Can you get the Humane Society to help? Are you on your own? Can you negotiate with them? Are they a whole herd? Or several smaller herds plus independent ones?

Yeah, I’m liking the ways this can go.

I could imagine that kind of scenario happening in a cyberpunk-ish/biopunk-ish dystopia, which is how I’d like to approach fluffies, as opposed to the constant recourse to contemporary/modern day settings.

I would imagine the character sort of going back and forth between being totally ruthless because they are making him miserable and being unwisely merciful because they are cute and suffer loudly.

On the flip side, these things are literally pests. The very first thing we see them do is fuck, piss, and shit out in the open. Biological and waste fluids can wreck havoc on a home.

Please treat this as the pest invasion it is

Which is precisely why you need to nip it in the bud FAST. no half measures